Batumi – the Pearl of Georgia by the Black Sea

You are here:
GeorgiaTouringTouring Adjara and Guria 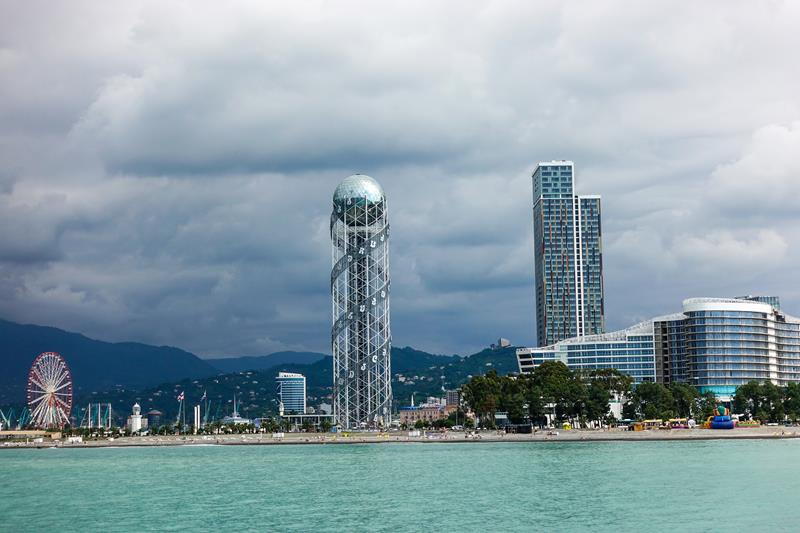 “With heavy hearts we bid Georgian shores farewell” – with these words, the Polish all-girl band Filipinki celebrated a place they had never been to or seen with their own eyes. It was only a little later that the band members had the chance to visit Georgia, in order to see for themselves the beauty of Batumi – a city which they had sang about as the “dream of our dreams” and which thus became the dream travel destination of many Poles of that time.

Nowadays, many people associate Batumi with the warm waters of the Black Sea, luxury and the famous Chacha Tower and fountain. Not so much down to its interesting architectural form (which is in fact worth seeing), but because… free chacha flows from it – chacha being a famous Georgian healing potion 🙂

Not all the time, of course – a few years ago, the four silver spots the fountain is made of poured streams of the best grape vodka one day a week during the summer season. The whole thing only lasted a few minutes, and yet this was enough for the town, which is located in south-western Georgia, on the coast of the Black Sea, to find renown all over the world and draw hundreds of excited tourists to see its liquid wonders.

Close to the Chacha Fountain we will find Alphabet Tower – an early design by Mikheil Saakashvili. A modern sort of design, reminiscent of a DNA spiral, made of the 33 letters of the Georgian alphabet (the symbol of Georgian national pride) meant the Georgian president began to be seen as a visionary. Soon enough, however, people realised he was an ordinary madman. For good reason too – for Mikheil Saakashvili decided to blow up a local mountain in order to change the city’s ecosystem.

Batumi is located in a spot where the mountains of the Small Caucasus, bordering Georgia to the south, drop straight into the sea. This geographical feature means the city has a sub-tropical highland climate, clouds forming over it all the time. During the tourist season, it rains every couple of days – either drizzling or pouring fiercely. Is this any reason not to pay this city a visit?

A City with lots to offer

I have been touring Georgia since 2007 – having visited Batumi several times in the past, I have noticed that it is best to come here for a day or two, and then move on – it is a mistake to stay longer, seeing as the beaches are rocky, it often rains, the days turning grey, cloudy and one never knows then what the weather will be like.

I have to admit, however, that recently my opinion of the town has really changed. It is filled with attractions, which one must simply see, including Alphabet Tower – entry costing 8 lari. There is also the cable car, which takes you up to the highest point in town. Once, riding this service, we would see Lenin’s head lit up at night, though today it has been replaced with a large sign spelling out the letters BATUMI.

It is also worth visiting the famous, Italian style square called the Piazza, with its clock tower which at 6pm plays the Georgian national anthem titled Tavisupleba, which translates as “freedom”. A good way to get to know Batumi is to walk along the boulevard, several kilometres long, or else stroll to the centre of town, with its wonderful architecture and lush green spaces.

You can also visit the archeological museum or else go to a fairground and dolphin reserve (dolphins are the city’s emblem, you can see them in a film which I shot with Maja from the channel „Gruziński po polsku” – Maja happens to come from Batumi, which is why she’s the best source of information about how this city has changed over time).

Today, Batumi is a wonderfully welcoming tourist destination – accommodation, places to eat and party are all plentiful. New modern hotels are opening all the time along the Lech and Maria Kaczynski Street. The “all inclusive” system is in operation all over Georgia, although I think tourists have these “all inclusive” servings of chacha, wine and mineral water served by all small tour companies.

According to lore and popular songs, Batumi has always seemed like a haven for all tea lovers. But when I came here the first time in 2007, Georgians told me: “Our tea is dead”. There never were any tea fields in the city itself anyhow. The nearest such fields can be found in the village of Chakvi, which also features a lovely botanical garden (entry fee 8 lari). One can spend hours wandering its lanes, admiring plants from all sorts of regions of the world. I suspect that Russians, who experimented over the centuries by planting flora from different parts of the world all over their country, must have been surprised to find that plants, which elsewhere needed centuries to flourish, here in a matter of decades grew to truly impressive dimensions.

Touring this district, it is worth visiting Gonio and its Reggae Bar, ran by Karolina from Poland (I also shot a film about this place link). Tomek Groja also runs a Polish hotel close to the centre of town, which I highly recommend if you are in search of good, affordable accommodation in Batumi.

We ought not to forget of course that one of the biggest attractions of the capital city of the Republic of Adjara and its environs is the sea. If you’ve had enough of bathing and sunbathing, you can take a pleasure cruise on the Black Sea (10 lari per person).

Summing up, even though the weather is not always sunny, I highly recommend visiting Batumi. Private airlines fly here from Poland, while other airlines have announced they will be flying regular routes from Europe, and then between Tbilisi and Batumi. It is worth staying for a minimum of three days, exploring all the local attractions and leaving with a real sense of holidays well spent.

See you in Batumi!