St Petersburg and Moscow in 8 days – journey to another dimension

You are here:
Russia, Asia, Europe 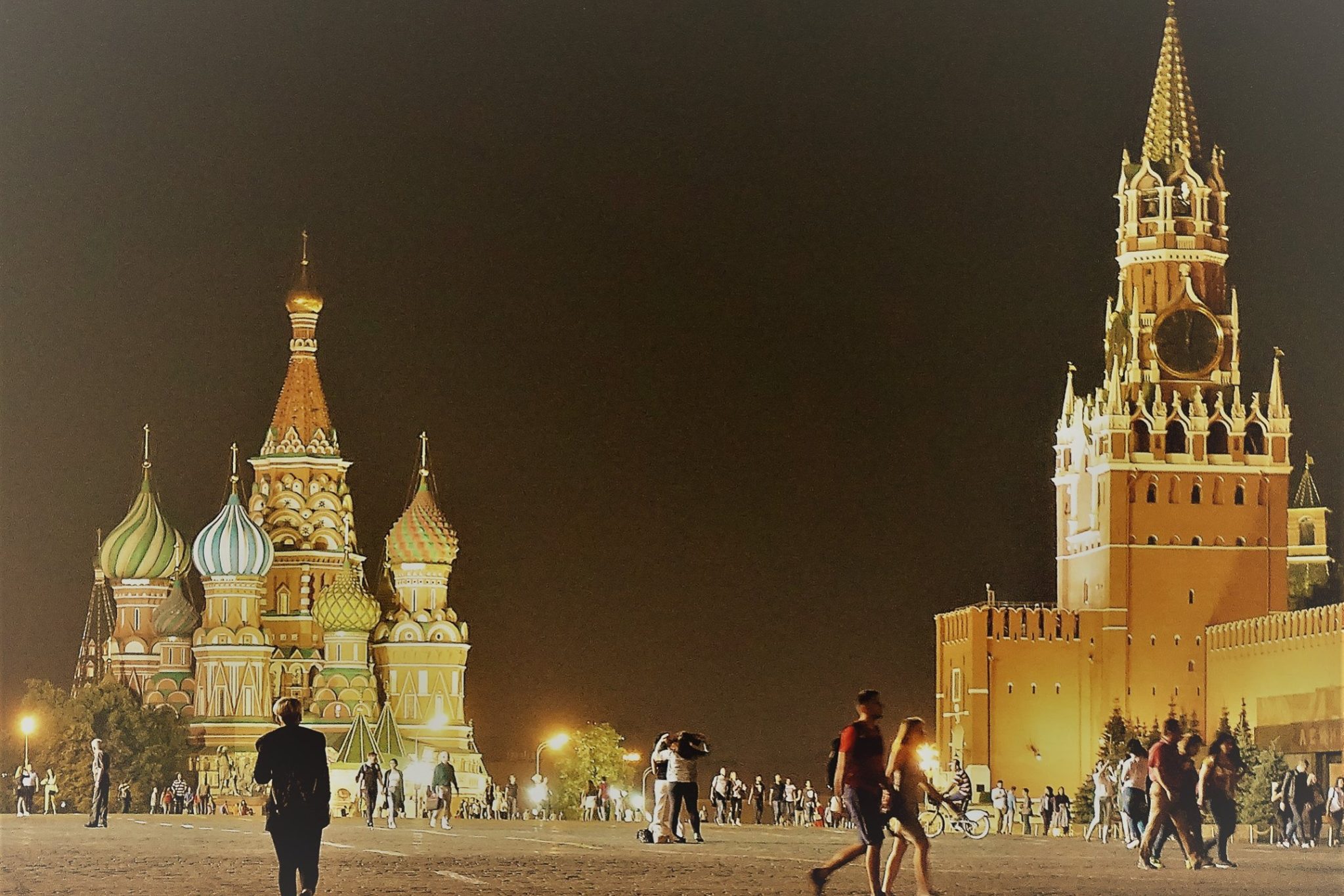 Following the 40 degree Celsius heatwaves in Georgia, we can finally cool down in Moscow and St Petersburg, where it is a balmy 16–19°C. Such temperatures are perfect for us to admire two of the most frequently visited cities in Russia – the current and the former capitals, two different worlds, separated from our European mentalities by a vast chasm.

I have been to both Moscow and St Petersburg many times now, and each time I visit both cities are still capable of surprising me. I continue to discover new and interesting places, meeting fascinating people, previously unfamiliar flavours, aromas, emotions. Once again, I take in the local atmosphere – so unique, one really must experience it personally, each and every visit being a fresh sort of encounter with the Other.

Our first night (or return visit) in St Petersburg is now done. After dark, the city of 396 bridges and 101 islands reminds me of childhood fears of the unknown and that old excitement when, in thinking about Russia, I imagined what I might find here.

St Petersburg by night is not as hectic as Moscow, which really is open 24/7. The mood is pleasing, though the city is not too quiet and certainly far from deserted. Tourists and the locals tend to come out after midnight in order to see a wonderful, nightly spectacle on the river Neva. Between 1.00 and 4.00 in the morning, bridges allowing ships to sail in from the Baltic open up, giving access to a system of rivers and canals which then connect with the Volga. This time however, instead of taking endless photographs, I simply stand there and watch. There is something remarkable about visiting one of the prettiest cities on earth, countless waterways reflecting street lights and coloured illuminations, echoing the shapes of the historical buildings all around us. Ship engines hum, waters and people whisper all around us – once the spectacle is over, the latter moving on to music clubs, buzzing with a very different sort of St Petersburg energy and life.

Day 2. – St Petersburg and one of its streets

Come the morning, St Petersburg fills with cars and people. Many are heading in the same direction as I – to Nevsky Prospect. This main thoroughfare designed by Peter the Great is a great place to spend a while day without once feeling bored, bumping into long lost friends along the way.

This 4.5km long avenue is lined with colourful, stylishly restored townhouses, along with boutiques, restaurants, coffee shops, souvenir stores and offices. One of the building houses the luxury Grand Hotel Europe. Nevsky Prospect is also home to many places of interest: the National Library of Russia, the House of Literature, Kazan Cathedral, St. Petersburg, the Catherine II monument and many other attractions, including two key museums – that of the 20th century and The Samoilov Family Museum, dedicated to a renowned actor of the Tsarist Alexandrian Theatre.

Nevsky Prospect is a good spot to eat a tasty bit of lunch and do a spot of shopping in boutiques and malls, but most of all to walk and wander. This broad avenue, trolleybuses floating about up and down it, then becomes the Anichkov Bridge over the Fontanka River – built in 1841, decorated with statues of horse riders sculpted by Jerzy Klodt von Jürgensburg, leading either right – over the river to the Fabergé museum, or else further on as far as the Palace Boulevard on the Neva.

Most people head the other way, to see the amazing Hermitage art museum, the Alexandrovsky garden and the imposing Admiralty building – one of the most important buildings in St Petersburg and finest example of the Russian Empire architectural style. The building, erected in 1704, was at first a shipyard, but then converted in monumentalist style, the only element of the original design being the characteristic entry gate, 72 metres tall, topped with a gilded spire and a model sailing ship made to imposing scale: 192cm long, 150cm tall, weighing 65kg. Ever since 1886, the original sailing ship has been replaced by a copy, and the original can be seen in the Central Naval Museum, located on the other side of the river, behind the Palace bridge (15 mins on foot). The sailing ship is worth seeing, for it is one of the informal symbols of St Petersburg – Russia’s Venice of the North.

I end my long walk along Nevsky Prospect with a boat cruise along the canals and the Neva, a river I find far more interesting than most other European waterways. Its sky blue waters look particularly imposing on sunny days, its banks lined with lush greenery and historical architecture.

Day 3. The underground Palaces of the People

After a day on the surface, I go underground – for in St Petersburg there is much to see there too. Beautiful, fascinating, monumental metro stations are indeed like palaces for the people. There are 67 such stations all across town, servicing five separate metro lines, some of which have been running since 1955. In St Petersburg, just as in Moscow, there is nothing odd about touring the underground metro lines, for they are from miserable, grey forms of transport – each station a real work of art: crystal chandeliers, frescos, ancient style columns, art deco décor and finely wrought plafonds turn this environment into a real subterranean gallery. Having popped in to see Admiralteyskaya Station, submerged 102 metres below ground, I move on.

I board an express train and race along to Leningrad Station in Moscow, asking myself if the Sapsan train really does hit 250kph along those rails. The three hour long journey goes by in a flash. I spend a little while wandering round the bustling, noisy city – it never sleeps, but I have to go, for in the morning there is plenty to look forward to.

I start my Moscow adventure underground – inspired by the book Metro 2033 by Dimitri Glukhovski, featuring Artem – one of the few people who, following a global nuclear conflict, began their lives anew in the tunnels of the Moscow metro – I follow in his footsteps towards the following stations: Kievskaya, Paveleckaya, Tretyakovskaya, Kitay-gorod, Arbatskaya, Prospekt Mira and VDNKh (Russian: ВДНХ). Clearly, it is not possible not to recall the dark tone the novel sets when riding past those absurdly grandiose stations, decorated with mosaics, plafonds and elegant chandeliers. And yet the journey feels special, so I record it all on film. This is an unusual way of starting a tour of Moscow – tourists tend to first hit the Red Square, checking the metro out in the passing if they have the time. Reversing this process and the proportions of how we assign time to things in Moscow allows us to see the Russian capital from a completely different perspective.

The weather is not too pleasant – one day it is hot and stuffy, the next an evening rain shower turns Arbat Street into a new tributary of the river Moscow. Even so, I struggle on. Having pushed through a sea of crowds (anyone complaining about the tourist numbers in Georgia really must see Arbat during rush hours!), including local drunks, to find a Viktor Tsoi mural dubbed the Tsoi Wall. Tsoi was often referred to as the Russian Jim Morrison and John Lennon all rolled into one – Kino, the band he set up, compared to the Doors. This musical legend kept away from politics, though he was an active member of the Leningrad Rock Club. After the fall of communism, it was said among Russians that it was not Gorbachev nor John Paul II who helped usher in perestroika – it was this rock club, and Victor Tsoi most of all, who were responsible for bringing down the Soviet Union. Moscow streets, every step of the way, are filled with such fascinating sights, many harking back to recent histories.

The last day of touring Moscow – 31 July. I hit the sights – metro – Victory Park with its architectural complex commemorating the great fatherland war – more metro – the renowned TV mast Ostankino, 540m in height, built over 50 years ago to honour the October revolution – metro once again – other Moscow wonders.

As we ride from the suburbs to the centre, I stop to do something I have dreamt of doing since I was a boy – I buy a matryoshka doll. I buy it where I should – not by the Royal Castle in Warsaw, not on the square market in Krakow, not on the Dry Bridge in Tbilisi, but in Russia. Some argue over whether matryoshkas can be considered a form of Russian folk crafts. They first appeared only around 1890 in Japan and featured a wiseman called Fukuruma. It was only once they proved immensely popular at the Paris World Fair in 1900, the Russians took up the design and began producing these unique dolls, now painted in more traditionally Slavic designs. Without getting into all those historical disputes, I simply grab hold of the toy I’ve always dreamt of.

A day later, on the 1st of August, I fly back to Tbilisi using Georgian Airways. During the short, two-hour flight, I enjoy the fine dining served onboard, something no longer true of air travel in the West of Europe. For the first time in 11 years, I land in Tbilisi in the daytime (departure from Moscow at 11.30 local time, arrival in Tbilisi at 14.50 local time).

I haven’t yet gotten out of the airport when I start thinking of how I am due to set off for Tusheti in less than a day. All this ceaseless travelling means another fantastic Tamada Tour adventure is about to happen, accompanied by amazing people all wishing to take in as much of our world as they can.

NOTE: the ISIC international student card is not recognised in many Russian museums, theatres and other tourist attractions, while discount tickets are often only available to students, youths and children who have Russian passports. The general practice is to sell tickets to foreigners at prices higher than those for locals, especially so in Moscow.