The Art of Winemaking in Georgia 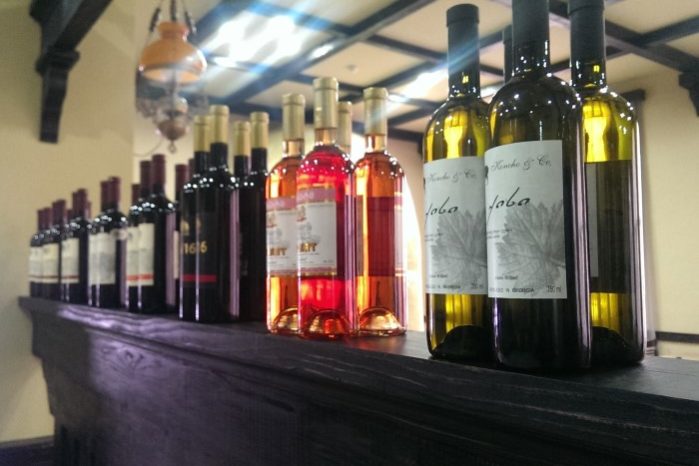 The traditional process of winemaking in Georgia has been on the Intangible Cultural Heritage List of UNESCO for quite some time now. Hence, this is a great opportunity to give you a little insight into this great liquor which, if we take the scientists at their word, originated in Georgia. Many people say that ‘wine’ derives from the Georgian ‘ghvino’ and numerous archeological digshave indicated that the first grapes were grown on the Caucasus and in Turkey 8,000 years ago!

The process of winemaking in Georgia is one of its kind. Even 4,000 years B.C. the Caucasian winemakers dug large vessels called qvevri (in Georgian ქვევრი), in which wine could be stored for 50 years. What comes as a surprise to all wine lovers and connoisseurs of wines, is the very fact that Georgians, in their traditional way of winemaking, do not keep the grapes and must separately. Hence, because both grapes and must ferment together, the flavor of wine is so excellent, fruity, and delicate.

The Art of winemaking in Georgia

Each time I visit Georgia I can observe the connoisseurs of wines who are used to the European ways and methods of winemaking. We, Georgians, do it differently – always against the world and always swimming against the tide. Some tourists are tearing their hair out because the world of wines they always knew collapses in Georgia and so they have to build one anew. Some of them shout “You’re doing it wrong!”… Wrong? Georgian winemaking began much sooner than European so this is exactly how it has to be done for God’s sake 🙂

The separation of juice from the pulp (both must and grape seeds) used to be made in a traditional way – crushing the grapes by human feet, just like in France. Currently, it is made mechanically. Juice, skins of grapes and seeds go to qvevri, whereas branchlets and leaves go to the compost. The clay vessels dug in the ground stay open and they are encased only with flat stones for the sake of sterile environment. The contents of the vessels must be stirred daily in order that gas can be released and pulp does not become vinegar. Wine is stirred with a traditional tool – a long stick with thorn ending. Similar tools serve to monitor the quality of the liquor. The most interesting traditional tool, made from a pumpkin, is a special gourd with which a wine can be scooped. After around 2 months the qvevri can be hermetically closed by sealing. After next 3 to 6 months the contents of the vessels undergo clarification, so that the pulp, known as chacha in Georgian, settles to the bottom.

After qvevri is opened, a high quality wine is at the very surface, a table wine is in the middle, and from a fermented must, which settles to the bottom,Georgians produce a famous Georgian moonshine – chacha vodka. What I consider as the best in Georgian winemaking is the respect Georgians pay to the grapes. Whatever the soil gives can be used in the production of wines so as you can see alcohol can be made of anything. In Georgia, alcohol is like a MEDICINE.

Qvevri wine is only a dry wine because it is impossible to break the process of fermentation becauseit has to be completed. In a nutshell, the whole sugar, from the sweetest Georgian grapes, has to become alcohol. This makes the traditionally produced wines the wines with larger alcohol content when compared to European wines: red wines by 1% and white wines by 0.5%. You can tell Qvevri wine apart from other wines because it is much more expensive and there is often a picture of qvevri on the label, or at least it is mentioned in the description given on the label. Currently, the vast majority of local winemakers make no more than 10% of their wines in traditional Qvevri method.

Only in Georgia, some of the winemakers harvest grapes even 4 times a year! The first harvests, the green harvest, start at the turn of July and August. The next two-three harvests take place in September and October.

Georgians, by all means, move with the times and so they also produce wines in European traditional method using the complete equipment and temperature adjustment to the process of fermentation. This way, semi-dry, sweet and rosé wines are produced.

Again, the history of winemaking is as complicated as the history of the Caucasus. At least 520 one of its kind grape varieties have been produced here over the centuries. These varieties are distinctive in terms of climate zone and region, from the Black Sea up to the border with Azerbaijan. Due to the Turkish invasions and Stalin’s orders, the vast majority of grape varieties were destroyed. Until today around 30 grape varieties, which survived, are permitted to the production of wine.

Kakheti is the cradle of the Georgian wines and as I mentioned in other articles, produces currently 70% of the annual production in Georgia. The legend has it that both the inhabitants of the country and grapevines were born out of the soil at the same time. The grape crops stretch for miles up to the peaks of the Greater Caucasus. Each Kakheti has a small grape crop on his own or a small wine cellar called “marani”, where home-made wines are stored. Georgians even wet the lips of newborns with the drops of traditional wine so the babies can know what their country is so renowned for. In the town of Kvareli, which we visit with our groups, there are 8 kilometers of tunnels with temperature perfect for wine storage. There are 15 distinct tunnels and the route available for tourists takes a ten-minute walk. A great experience guaranteed!

Tsindali wine, from Telavi – the capital of Kakheti, was very popular among Poles after WWII. What’s interesting, it was Poles, of Georgian origins, who were the workers of the winery. Later, due to the escalation of Georgia’s conflict with Russia, the export of goods ceased. Currently Georgian wines are available in many Polish stores.

It’s also worth mentioning that Russia is the biggest importer of Georgian wines. During the times of USSR, Georgian wines were much better than those from Moldavia, the Crimean Peninsula and other colonized regions.

The art of winemaking is still visible in other regions of Georgia – Kartli, Imereti, Racha, and in Abkhazia, which remains beyond Georgian control.

The most important grape varieties, from which both Georgian and European wines can be produced are:

The most recognizable wines are:

Drinking wine is said to be a medicine for both body and soul – but in moderation, of course 😉

It’s worth tasting delicate home-made wines, available almost at every Georgian family’s house. The production of these wines takes two weeks and they’re as delicious as juice so little wonder many Georgians start drinking wine at breakfast time 🙂

Another fun fact is that before served, Georgian wines are cooled and the best wines are not those from bottles – the best are Georgian DIY wines from the two-gallon carboys 🙂