The Magic of Mestia. Fortifications, Svan mysteries and glacier trekking 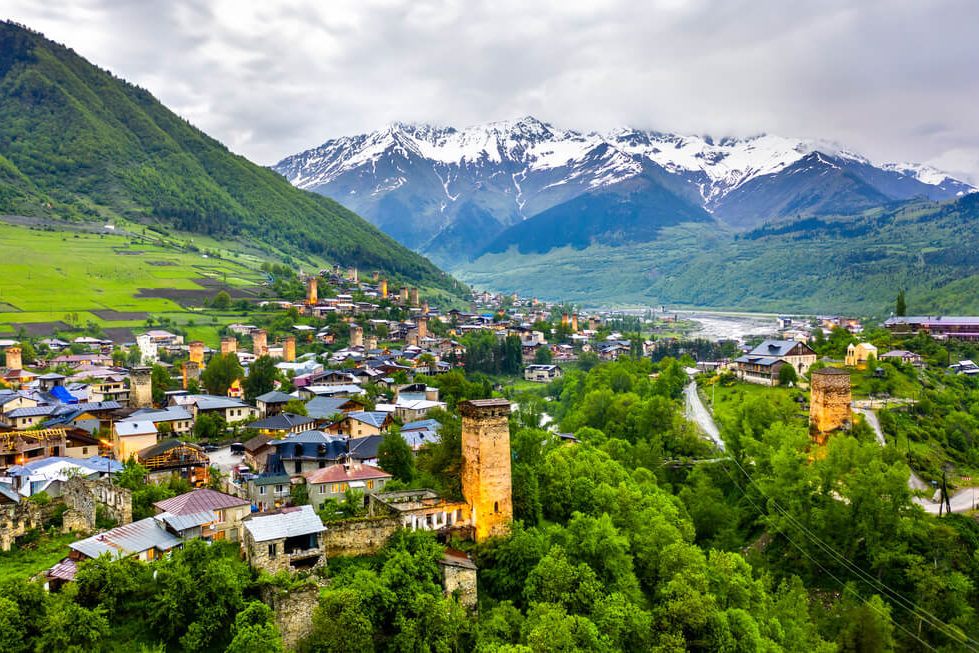 Mestia today is just like any other highland tourist thoroughfare, commercial enough, though perhaps less crowded than elsewhere. Once visitors have explored the mighty fortified towers and the local museum, they scatter about the surrounding mountains to explore the glory of the nearby glaciers.

Mestia is an excellent example of something called daba – a settlement quite characteristic of Georgia, which is neither a large village nor a small town. What you get is a main alleyway, a park square and guesthouses, five bars and coffee shops is all (Cafe Laila, the most popular of them all, is often so full it is impossible to even make reservations ahead of time).

A roan on a futuristic deck

Although Mestia is not large, home to some 2000 residents, it is the administrative centre of the Samegrelo-Zemo Svaneti region. In 2010, the Queen Tamar Airport was opened, facilitating flights to Kutaisi and Tbilisi (key pointers at the end of this article). Jürgen Herman’s unique architectural airport design has been added to the list of the most extraordinary sites of such kind in the world. It really does look amazing – especially when cows roam freely next to its futuristic, steel & glass construction.

Mestia, situated at a height of 1400 metres above sea level, is most of all famed for its pearls of medieval Svanetian architecture, material culture and ethnography. The town, along with the site of Upper Svaneti, was as a result added to the UNESCO list of world heritage sites.

A local treasure of note is its characteristic stone towers. The towers, used as hiding places during bloody feudal disputes, climb proudly above the residential buildings and farmhouses, known as machubi, thus forming Mestia’s unforgettable vistas. They add a magical touch to the way the town looks in the evenings especially, lit by the warm glow of street lamps.

Some of the traditional home-fortifications are open to tourists – it is worth seeing the Margiani family tower, one of the most imposing in the district. Once upon a time, the Margiani’s owned eight such towers in the area, but only four are left standing today. In the tower open to visitors one can climb the floors to see traditional Svanetian furniture (such as the hand carved throne, the seat of the makhvshi – the head of the family), a richly decorated trough for hay used by farm animals, and a marani basement, where clay pots were stored containing honey and kvevri – clay wine amphoras. One can also see the places captured enemies were held – as well as where naughty kids would be made to stand in the corner as punishment.

A few steps further on there is the museum-home of Mikheil Khergiani (1932–1969). The tower and the adjoining machubi house a collection of photos, documents, clothing, footwear, climbing equipment and numerous other souvenirs commemorating this legendary alpine mountaineer – who died tragically while climbing the Su Alto peak in the Italian Dolomites. Just as in the Margiani tower, this museum is also filled with icons, furniture, pots and farming equipment, along with many other Svanetian exhibits – this ethnic group is fascinating, and more can be learnt about it by visiting the local museum.

Ethnographic gems at the Svaneti Museum of History and Ethnography

The Svaneti Museum of History and Ethnography is situated off to the side of the main residential part of Mestia, just behind the river Mulkhra. This is decidedly the most interesting bit of the town map, filled with fascinating mementos of the region’s cultural heritage.

Coming here, it is worth checking out the ancient temples in the region. The Orthodox church of the Assumption of the Blessed Virgin Mary, Saint. Nicholas, Transfiguration, as well as the surrounding temples of Archangels (Taringzel) and the Savior feature beautiful altars, relief frescos and valuable icon art. In the Savior’s church in particular we should pay attention to an 11th century icon – a wonderful early version of paintings still to come, now sheltering in various museum rooms.

The Svaneti Museum in Mestia – first opened in 1936 in one of the ancient towers, then moved in 2013 to a purpose built site – is truly special, not just in a Svanetian context, but for all of Georgia. It should be visited at all costs, in order to see its priceless exhibits, gathered over time from all over the country, to save them from being destroyed and pillaged. Why is it that little old Mestia has become a safe harbour for Georgian heritage? The topography of the region holds the answer – known in ancient times as Suania, surrounded by 5000 metre tall peaks and located far from the main Caucasian trails – for centuries, it was almost completely inaccessible. Not even the undefeated Mongol armies managed to reach it! Hence these are the lands where the treasures of Georgian history and culture came to find their resting place.

These valuable collections include the aforementioned orthodox icons in the original Svaneti style (featuring scenes of the torture of Saint George, Christ Pantocrator), crosses and bracelets studded with precious stones, numismatic collections and ancient books (illuminated religious manuscripts dating back to the 5th century, produced on paper and vellum, documents recorded on wood in the 16th and 15th centuries, as well as printed books from the 18th and 19th centuries). Then there are the archeological artefacts dating back to the 3rd century BC found in the region, including ancient decorations, ritual figurines, as well as exhibits featuring Svanetian traditions: richly decorated daggers, armour, shields and arrowheads, hand-carved furniture, musical instruments, household and farm equipment, various dishes, ceramics, jewellery, clothes and even wooden crampons for walking across ice-covered mountains.

The museum allows us to learn more about the Svanetian nation – we have no idea at which point in history they came to be in the region. According to the Greek geographer Strabon, this native population of Georgia was related to the ancient Sumerians. This is seen in the Svanetian language (belonging to the group of Cartel languages), different to Georgian, containing numerous Sumerian aspects. The question of whether Svanetian is a separate tongue or a dialect of Georgian, is rather complex. According to foreign linguists Svanetian is a separate language, but in Georgia itself it is perceived as a dialect – elevating it to a status of a unique language can cause controversy and disturb authorities, fearing separatist moods might flare up.

Svanetians also maintain their own archaic traditions, especially songs and dances. Unlike Sumerians, who called themselves the “black headed arrivals from the east”, Svanetians are often blond and blue-eyed, their skins relatively pale. They are still surrounded by a veil of mystery, intriguing travellers and researchers alike. The latter are constantly trying to unpick the mysteries of Svanetian ethnographic histories, including genetic codes. I would rather suggest that instead of scratching our heads over all that, we should set off on more Svanetian adventures!

Trekking to the Chalaadi glacier

Mestia is a great trekking starting point for the mountains of the Caucasus region. One can drive from there to the Chalaadi glacier – the walk which follows takes around 2.5 hours one way and the same on the return leg.

I set off guiding groups to the glacier on the 17th of August, right after 9.00 in the morning. The weather is fine, the trail – mostly well-marked, and the approach easy, even for those who do not have much experience of climbing mountains. At first, it is hard going over rocks and boulders, but then the woodland trail is wondrously even. The walk is accompanied by a soundtrack of soothing water flowing and dripping.

– Where is all this water coming from? – surprised visitors often ask.

– All coming from the glacier?

Glacier waters also flow in the rushing currents of the river Mestiachala, which follows our trail for a good long while. We then stop on a wide open meadow to rest up and dress a little warmer. What we see and hear and feel up there includes stronger winds, blowing cool gales. The mood among us trekkers is warm and uplifting though. We persevere upwards, driven by endorphins, lit by beams of the sun from the south, the lush Caucasian greenery glowing all around us. Any moment now, we will be conquering the Chalaadi glacier – veni, vidi, vici!

We wander across the rocky basin, listening to the waters whispering, adding to the charm of Caucasian natural vistas. We then stop to sit and take in the imposing peaks, green at the feet and snow-covered right up to the misty tops. Time slows to a standstill for a moment.

Soon enough, however, we head back, constantly looking out for stones slipping out from beneath our feet and those likely to fall from up over our heads. No joking about here – in July 2019, so a mere month prior, a mud-rock avalanche came down from Chaaladi glacier, washing away a wooden bar and some of the cars standing at a local carpark. I helped some Poles back then, seeing as their car had been washed away. We tried to find it in the aftermath, but all the vehicles swept away will now stay in Svaneti forever, buried beneath tons of earth and rock. This is why I always advise visitors to purchase additional insurance whenever visiting Georgia. Better safe than sorry.

Our descent went without a hitch, and soon enough we were safely back in Mestia. From there, we set off in a south-east direction, to the famed highland settlement of Ushguli, and then the Shkhara glacier – the highest peak in Georgia (5193 ASL).

Anyone wishing to stay in Mestia a day or so longer, can detour about 1km behind the town up a rough side road and reach – driving, on horseback or walking – lake Koruldi situated 10 km on. The trail weaves first up serpentines through a highland forest, then reaching a line of meadows and turn into a more solid path. All around us we will find beautiful vistas, lush grasses underfoot, the peaks covered in snow, shepherd huts sprinkled all about, along with herds of cows and horses. Wilderness! In a moment, on the horizon, we will spot the surface of the first lake, then a little further on the next lake – they are not large, rather shallow and no good for swimming. And yet their waters reflect the monumental Caucasian peaks, which at a height of 2850 ASL really do crown the wonders of Georgian natural landscapes.