What You can buy for 8 euros in Georgia?

You are here:
Culture and lifeGeorgiaTouring 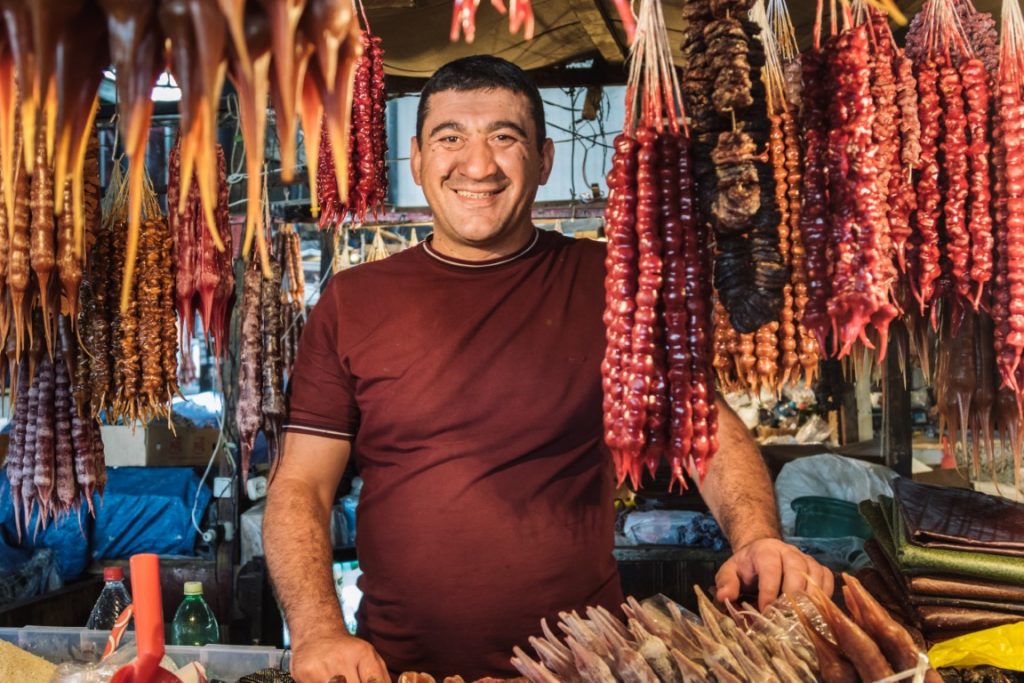 Let us travel together to visit a typical Georgian bazaar in the town of Telavi, in Kakheti region. This is the sort of place you really can buy just about anything: fruit, vegetables, meat, cheese, spices, churchkhela, homemade wines and vodka, pen knives, all sorts of electronics and numerous cosmetics. Let us see what sorts of things we can walk away with having spent our humble 8 euros. This translates to some 25 lari (GEL), which is the official currency of Georgia.

Telavi is a relatively small, sleepy and rather pretty town in the Kakheti region of Georgia, to the east of the country. Its bazaar is found in the very heart of the place, close to the central thoroughfare, a shopping centre, a court and several bank branches.

From five am each day, dozens of traders set up stalls in the sizeable bazaar square, covering them in foodstuffs, alcohols, flowers, electronics, clothes and countless numbers of other things. Therefore, let us get shopping!

Let’s start with churchkhela, which is a sort of local candy, often called the Georgian Snickers bars – let’s pick up two such items, with pomegranates and grapes, each one costing 2 lari – then add a litre sized bottle of Georgian moonshine called chacha for 5 lari. Thus we have spent 9 lari, just for starters.

We know that Georgia is also famed for its delightful, aromatic spices. It’s worth trying a sample of Svanetian salt (as the name suggests, originating from Svaneti). Another good choice is Georgian saffron, local pepper and dried peppers. Some also buy suneli, a sort of Georgian dried vegetable stock.

The choice is far from simple, for one might also come across adjika, which is available in two varieties: a pepper-tomato-herb paste, similar to Bulgarian ajvar, as well as a mixture of dried herbs, the ingredients including powdered tomatoes, chilli, sweet peppers, coriander, marjoram, basil, bay leaf, savory, onion and garlic. Adjika can be very spicy, and is often added to meats, fish, soups and salads. I tend to use it with all of my cooking.

Georgian spices are sold here by the cup, called stakan in russian language . One such cup costs around 50 tetri (half a lari), but saffron and some other herbs cost around 1 lari, which is less than one euro. Buying a cup of Svanetian salt – 1 lari, one cup of dried adjika – 1 lari, or a cup of “georgian saffron” – 1 lari. Thus we have spent 12 lari, meaning some 4 euros.

Now, let’s but local wines that is very important piece of georgian culture and traditional feast called supra. Let us remember that there can be no buying without first trying. For 2 lari, we can buy a litre of home made white wine, which is produced using traditional methods from grapes grown organically in Kakheti – richly flavoured and easy on the old head. Having spent a total of 14 lari so far.

Let’s have a look for some Georgian cheese. Sulguni is the best known variety, reminiscent in terms of taste to mozzarella, often used in the making of khachapuri pancakes. Those who like more pungent flavours can of course sample cheese left to mature a little longer. Let us start with the mildest. A kilogram of sulguni, which is a sizeable disc, costs 9 lari – 6 lari for 700 grams.

It’s worth noting that Georgian cheese are made of cows’ milk, which matters, because all those who have been or are going to Georgia will see – or else have seen already – that the local cows are often left to roam freely, to run where they like, and once they grow hungry they move to clean and fresh pastures new. As a result, the cheese made of their milk are organic and wonderfully tasty.

Returning to our shopping: we have spent a total of 20 lari, meaning 6 euros. We have cheese,  churchkhela, wine, vodka and spices. Now let’s buy some veg, which in Georgia, due to the favourable climate, are remarkably delicious and fragrant. Let’s take three tomatoes – for 1 lari. An eggplant costs a mere 40 tetri – a vegetable Georgia is famous for and which must be tried whenever visiting. The best form to do this in is sliced thinly and filled with a nut paste filling.

Georgia is also renowned for its cucumbers and other vegetables and fruits. Those you buy at bazaar stalls in Telavi are grown locally in Kakheti – a region so abundant, it yields fruit up to four times a year. In my father’s pension house in Lagodekhi, 80km further on to the east, we gather up to 400 kg of kiwi fruit which grows there all by itself, totally wild.

We’re left with 5 lari to spend – my hands sore from carrying all this shopping around. Let us take another look at a stall selling adjika, which we can now buy in paste form. A bottle costs 1.5 lari, some 0,5 euros.

I have 3 lari and 20 tetri left. We could certainly blow it on more veg and meat, enough for a truly filling meal. Yet having purchased everything I needed already, now I feel like buying some smokes. And yet – considering our preset budget limits – I will be forced to borrow a few coins from a friend.

Georgia is a haven for smokers, cigarettes here being extremely cheap – starting at less than one lari per packet, Pirveli brand smokes (the name means “first” in Georgian) costing in 2016 just 80 tetri. And yet the local brands are a bit strong for my liking, so I bought the classic Marlboro for a mere 3 lari (price from 2016). This leaves me with 30 tetri, enough to buy a “Gucci” branded disposable lighter – a fine way to invest the last of our monies, methinks.

Summing up our shopping basket

Going round the bazaar in Telavi we have thus spent a little more than 25 lari – some 8 euros. I haven’t kept my receipts, because – as it so often happens – they just don’t issue them at bazaar stalls. And yet, as we can see, a small sum of money really does go a long way in Georgia, allowing us to purchase the following items:

EDIT: I did all of the above shopping in 2016 – since then, the exchange rates have increased – so do not take the above prices as permanent gospel – only as a rough estimate. Even if we take into account that now a similar sum would buy fewer products, we must admit that it would still go a long way – the cost of living here being eminently affordable.