Skiing in Georgia. Gudauri – a paradise for lovers of perfect powder

You are here:
GeorgiaTouringTouring Mtskheta-Mtianeti 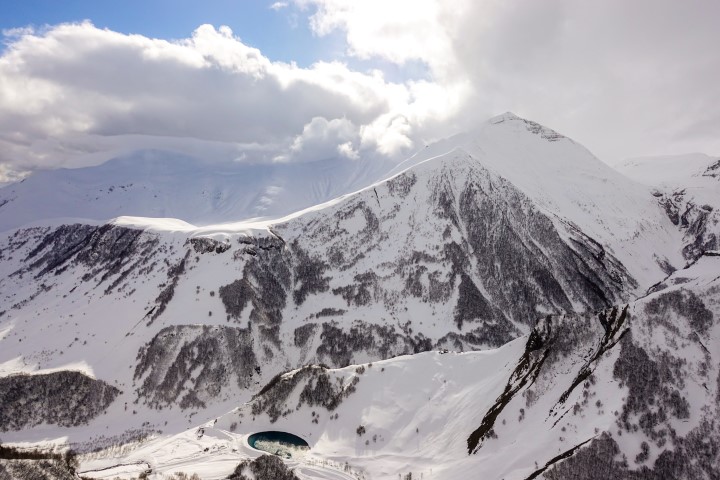 If you go skiing in Georgia, then it has to be Gudauri! This resort, found on the Georgian Military Road trail, really does deserve to be thought of as the country’s winter capital. More and more fans of fantastic skiing come here – both experienced and novices – but also all those who want to enjoy the wonders of Caucasian winters in all their glory.

Gudauri, located in the north-eastern part of Georgia, is currently undergoing a revival. In the past couple of years, this quiet little town has constantly been at the forefront of new skiing routes, trying to draw as many tourists as it can – having previously been more of a summer and autumn destination. The plan worked a treat! The town has changed beyond all recognition. Not that long ago, it was a plain old village for snow fanatics, but now it is a truly modern resort, with something to offer all those who visit.

Over 70 km of skiing trails

Gudauri is very popular with Georgians, but Russians, Ukrainians, Poles, Brits, Germans and many others visit it too. They are drawn by the magic of this unspoilt natural Caucasus region, with its phenomenal views, charming atmosphere, absence of crowds and huge potential the local amenities have on offer, being located on Georgia’s historical Military Road, a trail known to traders for thousands of years.

Gudauri, situated at a height of 2200 metres above sea level, offers over 70km of wonderful skiing trails. They are to be found on the slopes of two 3000 metre tall peaks: Kudebi (3008 ASL) and Sadzele (3260 ASL). Five ski lifts operate out of the resort, one gondola and several more basic lifts including special mat lifts for children. As a result, one can reach skiing routes quickly from many hotels, apartment buildings and pension houses. Most hotels and hostels also take skiers to ski lifts without charge, in order to help them find what they came to Gudauri for – its snow white paradise.

Gudauri’s skiing facilities are wonderfully advanced. One can easily hire skies, snowboards, helmets, skiing poles, even boots (although until the range and choice improves, I would recommend you bring your own specialised footwear). The ski servicing facilities available in  Gudauri are also highly recommended.

As I have already said a million times: Georgia can surprise us any time of year. Gudauri is no different in this respect – those who visit here can be assured of having a English, Ukrainian or Russian speaking skiing instructor ready and waiting for them on the slopes. They will ensure your stay in Gudauri is most pleasant, be you a skiing novice or expert.

Gudauri comes with great hotels and restaurants. Visitors can choose from small, charming boarding houses, as well as exclusive hotels. The Happy Yeti hotel sits alongside many other such establishments operated by both locals and foreigners.

Those keen on staying for longer can purchase their own luxury apartment in the recently completed New Gudauri estate. The idea is not without merit – I know folks who have bought apartments here, in order to then rent them out during the winter season (via Booking.com for example).

With the good comes the bad, of course. Many complain about the chaotic arrangement of hotels and condominiums, erected all over Gudauri and at various levels, varying up to 200 metres ASL. Having posted a film about Gudauri on my YouTube channel, I received comments that it was worth reporting about the lack of toilet facilities and poorly marked skiing trails. Deviating from the prescribed routes can lead to a long walk back, lugging our skiing equipment along highways or else forced to call cabs.

Others notice the prices – it is true that Gudauri is still more expensive than similar resorts in the Alps, which can be reached by car. Alas, the cost of airfares bump up these costs to make Gudauri unreachable still for some.

Armenia is similar in this respect, although it is not often mentioned in the context of winter holidays (though this too is recently changing). In both cases, the freshness and rawness of the Caucasus region is something which works in its favour, even if we are forced at times to deal with Post-Soviet era foibles.

Gudauri not just for skiers

Gudauri is also a fine place to visit for those who do not enjoy winter sports, or simply wish to relax, enjoy the powder, walk and maybe even build themselves a real life snowman! Gudauri is a great winter destination thanks to it’s professional skiing facilities and wonderful weather (the region gets a lot of sunlight) with stunning views. I think it would be a crime to come all the way here and not get up first thing in the morning to see the sun rising over Gudauri, especially since it gets dark around here about 6pm in the evening. Once the sun sets, it is worth popping into town. Gudauri is full of brand new restaurants, clubs, saunas, swimming pools and various SPAs, with no shortage of attractions to help you while the days away.

One of the local attractions is the monumental sculpture erected to celebrate Georgian-Russian brotherhood – featuring all the Soviet republics and queen Tamar, Georgia’s most renowned female ruler. The Russia–Georgia Friendship Monument, marked with the dates 1783-1983, makes a huge impression thanks to its imposing scale – apart from the snow-covered slopes, it is the main landmark in Gudauri, often featured on postcards. It is very much worth seeing in winter – a place of historical interest, while also being a great viewing platform for surrounding landscapes.

It is truly amazing to think of how Gudauri has changed in recent years. Some five years ago, when staying here with groups of tourists during the summer months, while travelling to Stepantsminda to view Mount Kazbek (it being the second highest peak in Georgia), in the evenings there really wasn’t anything for us all to do in town.

The only thing to do after hours was to take a walk to an orthodox church being built nearby, or else another such temple, finished already: then of course there was the supermarket. Yet in recent years the district has undergone a remarkable transformation. I am really impressed by the scale and pace of changes, in some ways embarrassed by how much has been invested into it. It is surprising to see how quickly places have popped up which are pleasing to the body as well as the soul.

Gudauri today is home to modern apartment blocks and hotels, serviced by beautifully designed restaurants, serving not just Georgian cuisine, but a range of dishes, including delicious steaks. We can take dips in a swimming pool which offers great views of local mountains, musing on the life stories of Poles who reached these regions many decades back – travellers, exiles, writers whose poems are still read at the feet of these mighty peaks, for they tell of a place which is worth experiencing for more than just its fine skiing opportunities.

See you on the slopes in Gudauri!